However, when we investigate the origin of okonomiyaki, the Kansai people will come to a surprising fact.
The origin of Okonomiyaki is Tokyo.
Today I would like to introduce its history.

The prototype of okonomiyaki is said to be “Fu-no-yaki”, which was spread by the famous Senrikyu as tea and sweets in the Azuchi-Momoyama period more than 400 years ago. (Senrikyu was heavily used by Toyotomi Hideyoshi.)

It is said that wheat flour dissolved in water is thinly baked and dough sprinkled with miso or sugar is shaped into a stick.
Isn’t it the Japanese style crepe?

There is a theory that after various changes, it became established as “Monja Yaki” which was the predecessor of Okonomiyaki in the Meiji era.
It was around this time that it became popular as a local food in downtown Tokyo.

However, at festivals and food stalls, Monja-yaki has a lot of water and is difficult to carry.

What was devised there was “Dondon-yaki,” which wraped around chopsticks with okonomiyaki dough and the Japanese sauce applied.

It is said that the name of Dondon-yaki originated from the sound of the festival drums. And from the Meiji era to the Taisho era, it spread steadily throughout the country.
And Showa. The name “Okonomiyaki” was born, it became a style to bake the ingredients that customers like. And after the war, ingredients were replaced cabbage because cheap and have a feeling of fullness.
It has undergone changes and ingenuity … Finally, it has reached its present shape.

The spread of okonomiyaki had gradually progressed in Tokyo.
However, on the other hand, in Osaka and Hiroshima, it was skillful than in Tokyo to change the style according to the taste of the land.
Therefore, the trend was created before Tokyo!!

Well, I want to eat okonomiyaki, which became familiar to me, with a rustic taste that basic recipes.
Everyone, why don’t you try making authentic okonomiyaki at home too? 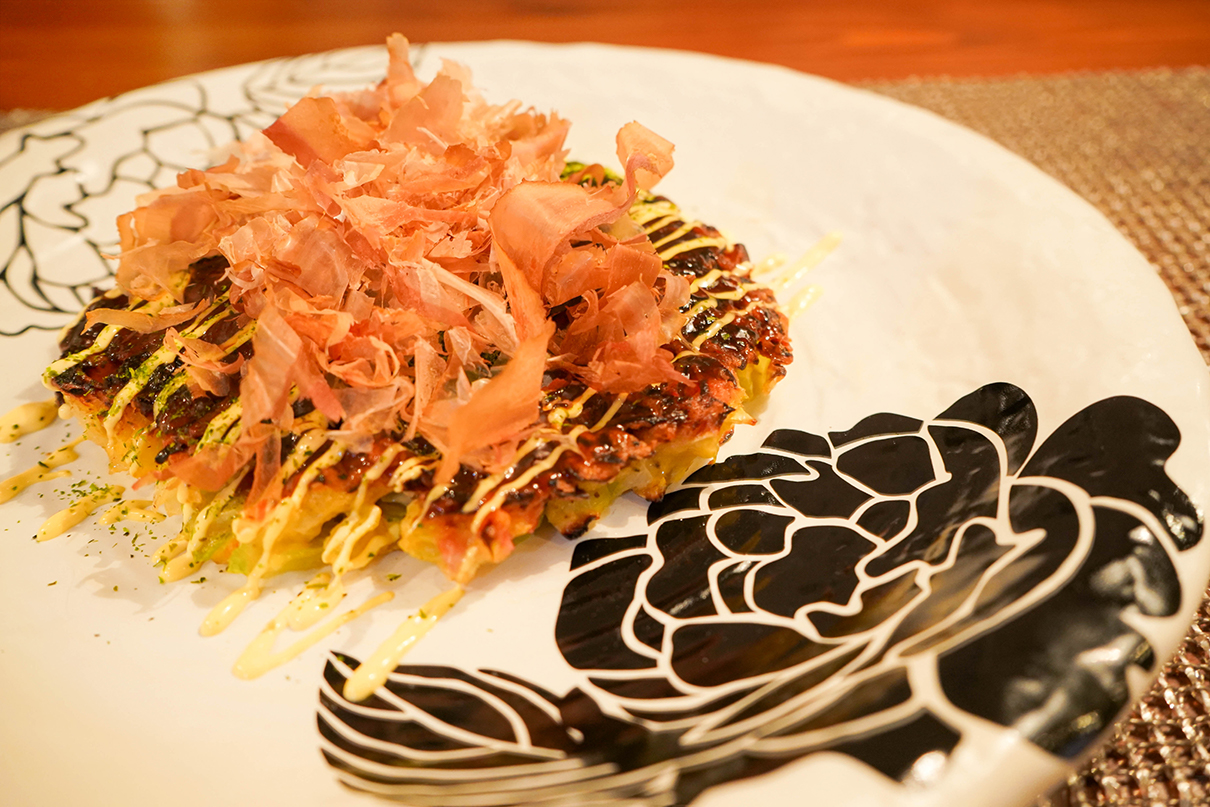 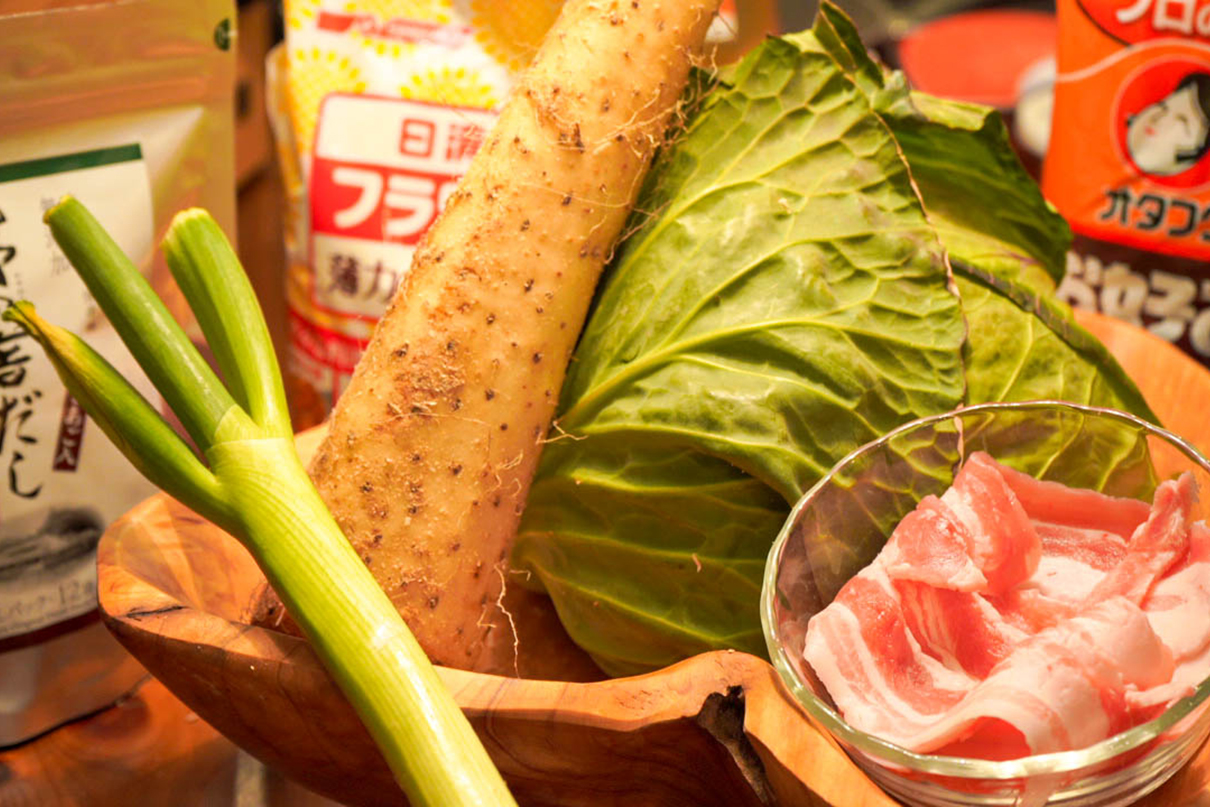 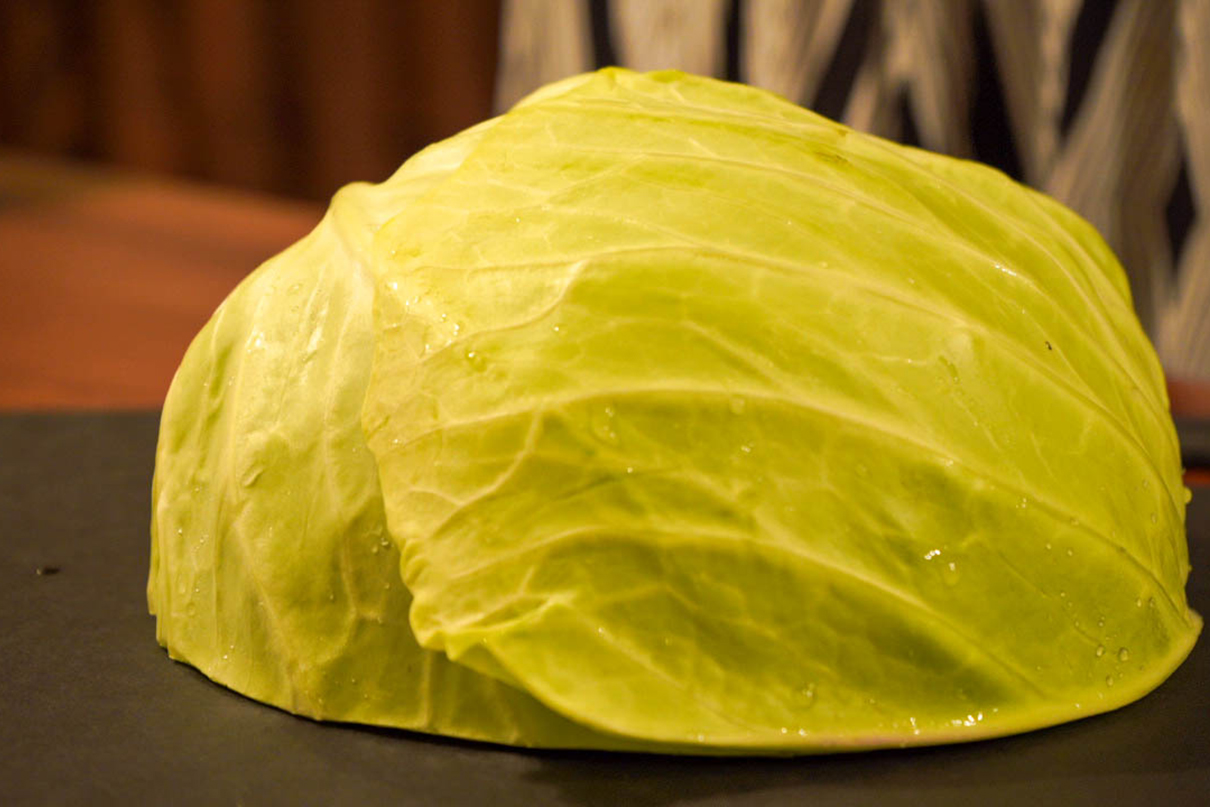 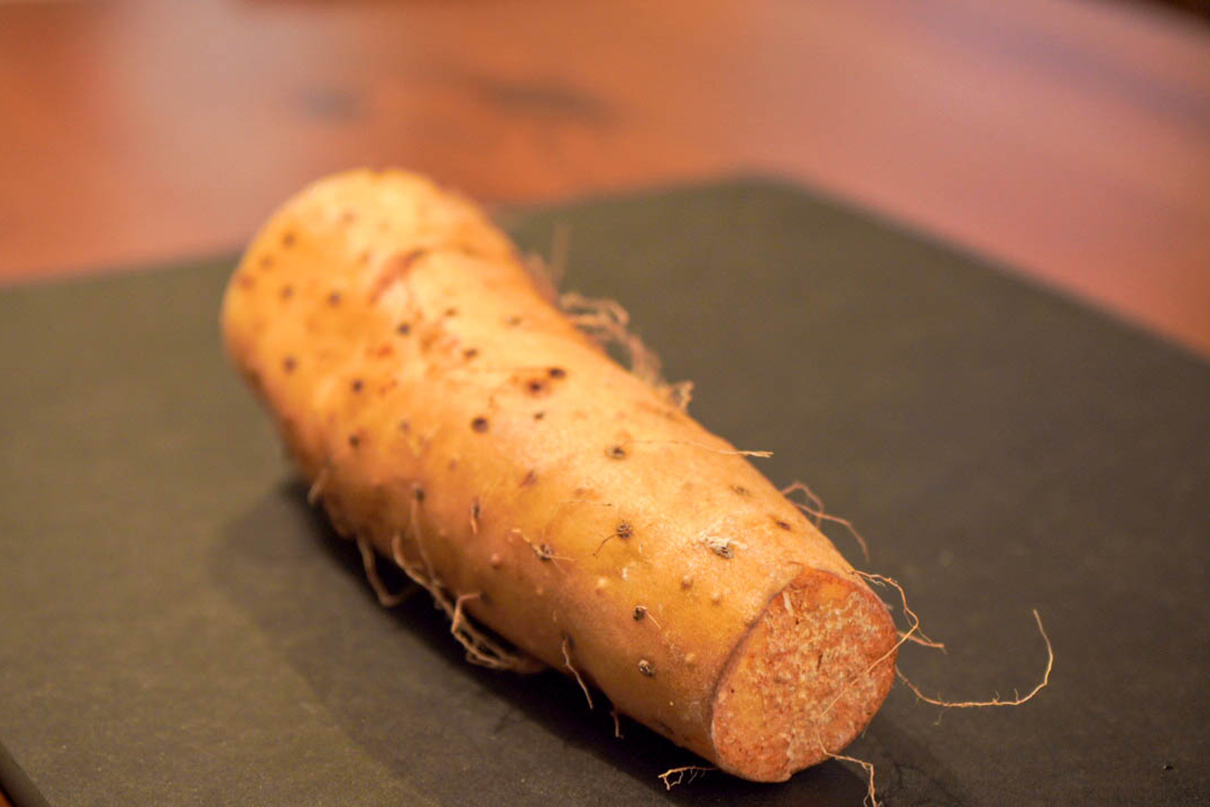 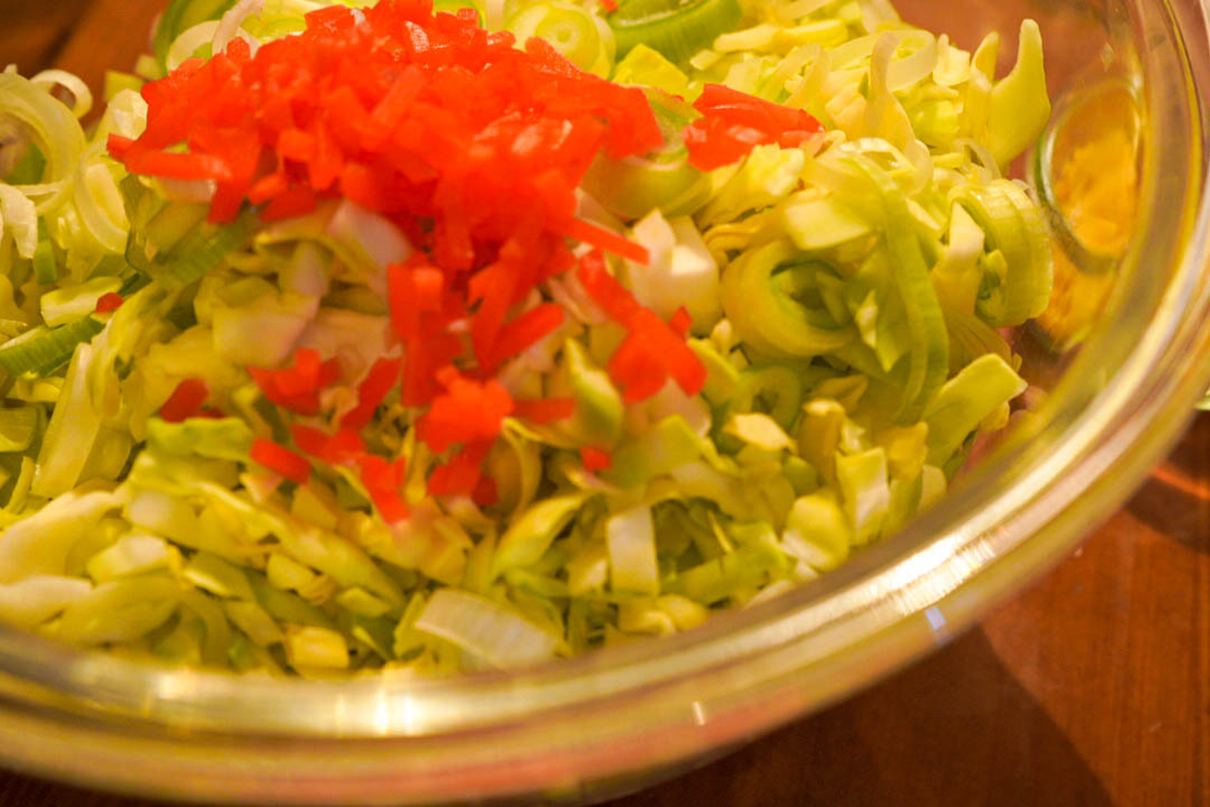 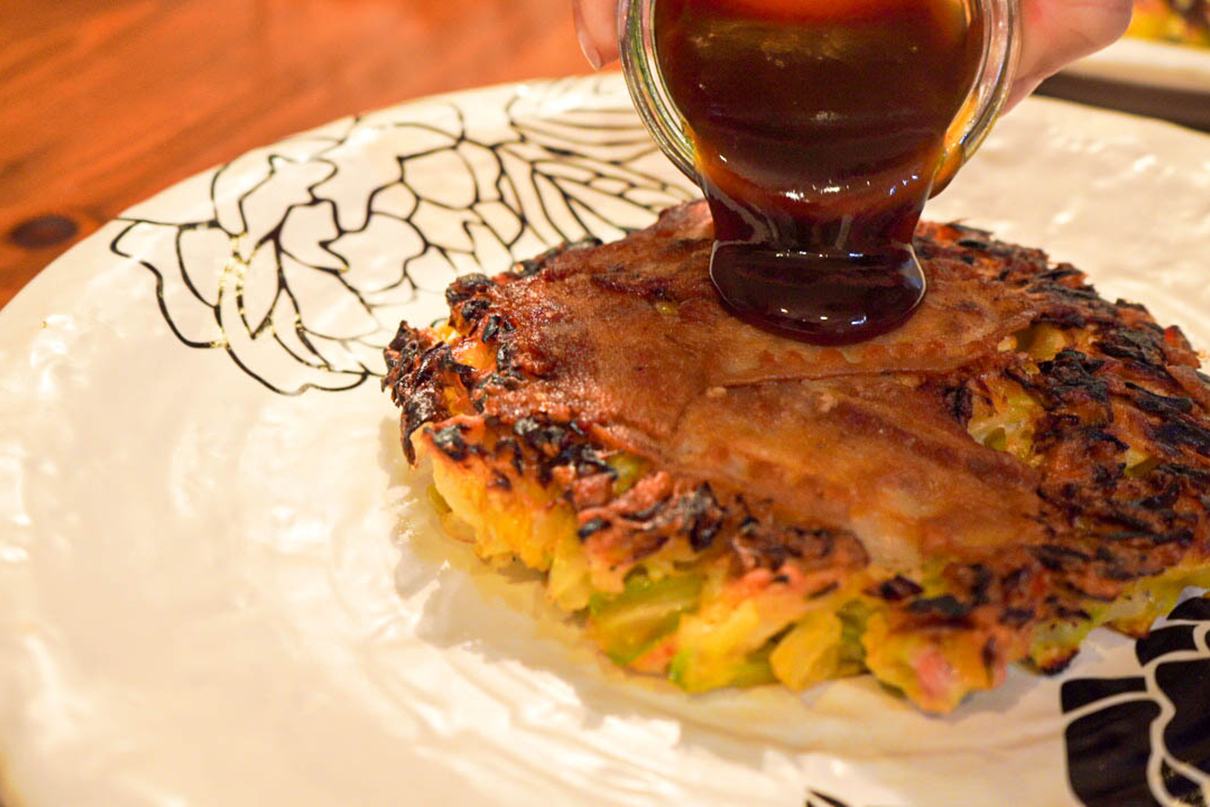 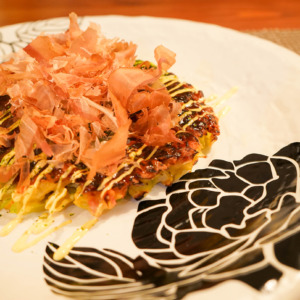 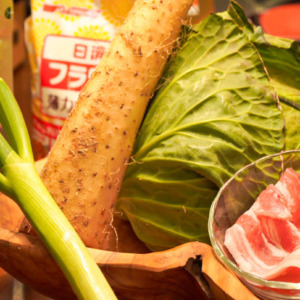 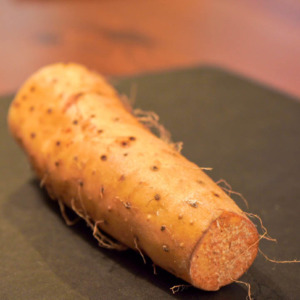 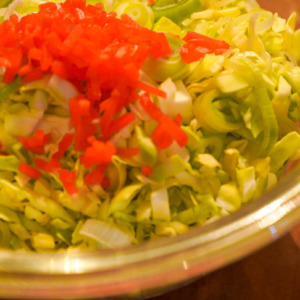 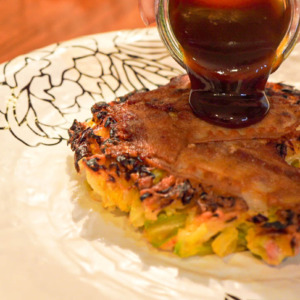 2 Make the dough.
Put the soup stock and water in another bowls.(Dashi packs break the bag and use the contents.)
Add the grated chinese yam and mix.
And add flour little by little and mix until smooth.
Add more eggs and mix them together.

3 Add the vegetables of (1) to the dough of (2) and mix gently.
＊The point is “do not mix too much” because I want to make plump “okonomiyaki”♪
＊Furthermore, cabbage becomes more and more watery, so it is important to mix just before baking♪

4 Add salada oil to a frying pan, heat over medium heat, and put the sliced pork belly.
Add the dough(3) on the pork belly, cover, and bake on low medium heat for 4 minutes.
*Again, the point is “do not push” to make plump “okonomiyaki”♪

5 If one side is baked, turn it over, cover it again, and bake for another 3 minutes.

6 Open the lid, put the okonomiyaki on the plate.
Topped with Japanese sauce, mayonnaise, green dried seaweed flakes, dried bonito flakes and it is completed.
*If you pour a lot of sauce, it will be more delicious♪

【Professional taste♪】How to make Japanese gyoza that anyone can make delici...